UNC Charlotte is one of a generation of universities founded in metropolitan areas of the United States immediately after world war ii in response to rising education demands generated by the war and its technology.

To serve returning veterans, North Carolina opened 14 evening college centers in communities across the state. The Charlotte Center opened Sept. 23, 1946, offering evening classes to 278 freshmen and sophomore students in the facilities of Charlotte's Central High School. After three years, the state closed the centers, declaring that on-campus facilities were sufficient to meet the needs of returning veterans and recent high school graduates.

Charlotte's education and business leaders, long aware of the area's unmet needs for higher education, moved to have the Charlotte Center taken over by the city school district and operated as Charlotte College, offering the first two years of college courses. Later the same leaders asked Charlotte voters to approve a two-cent tax to support that college.

Charlotte College drew students from the city, Mecklenburg County and from a dozen surrounding counties. The two-cent tax was later extended to all of Mecklenburg County. Ultimately financial support for the college became a responsibility of the State of North Carolina.

As soon as Charlotte College was firmly established, efforts were launched to give it a campus of its own. With the backing of Charlotte business leaders and legislators from Mecklenburg and surrounding counties, land was acquired on the northern fringe of the city and bonds were passed to finance new facilities. In 1961, Charlotte College moved its growing student body into two new buildings on what was to become a 1,000-acre campus 10 miles from downtown Charlotte.Three years later, the North Carolina legislature approved bills making Charlotte College a four-year, state-supported college. The next year, 1965, the legislature approved bills creating the University of North Carolina at Charlotte, the fourth campus of the statewide university system. In 1969, the university began offering programs leading to master's degrees. In 1992, it was authorized to offer programs leading to doctoral degrees.

Now a research intensive university, UNC Charlotte is the second largest of the 17 institutions within the University of North Carolina system and the largest institution in the Charlotte region. 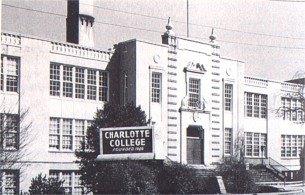